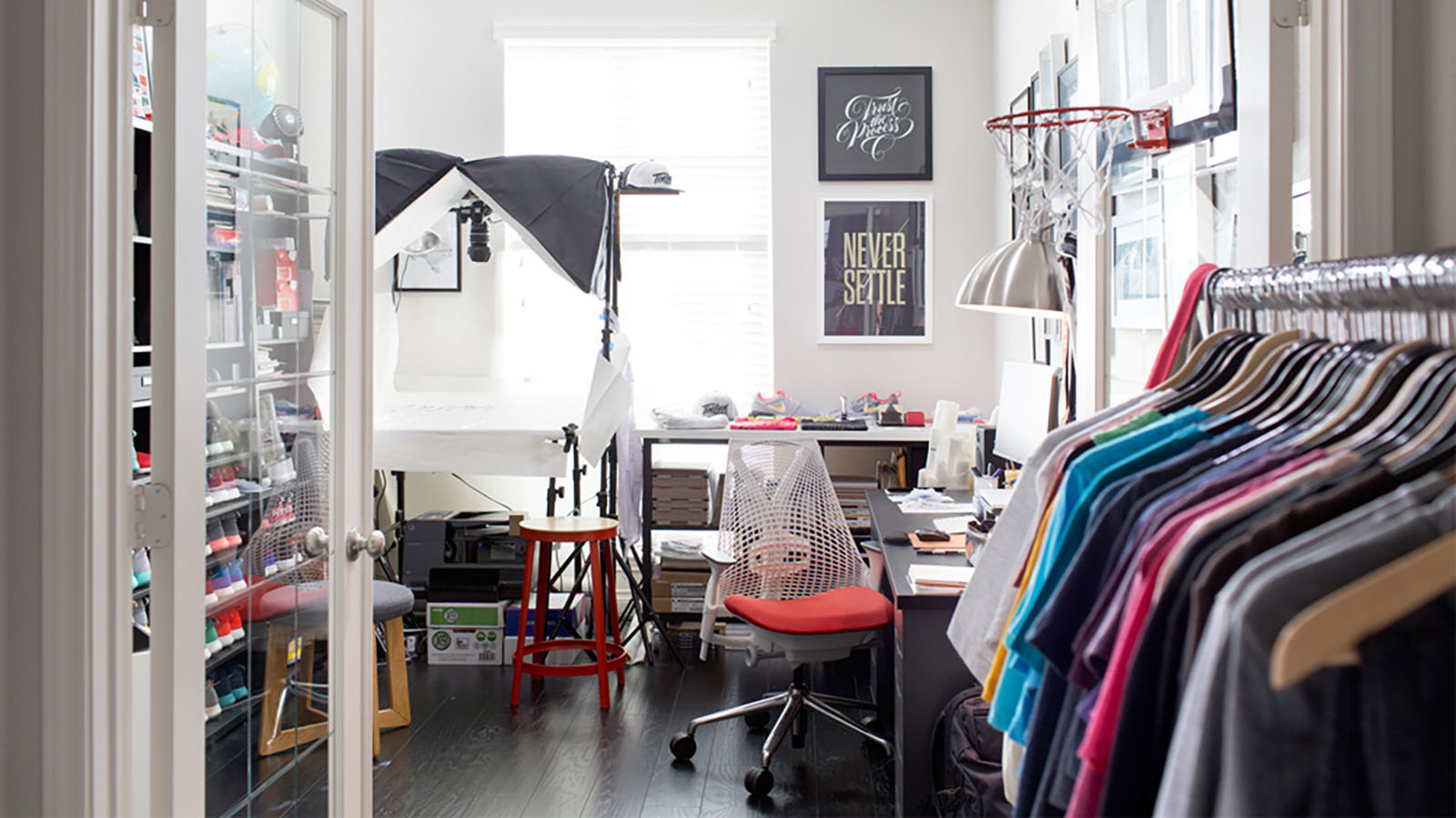 Launching Your Creative Career: A Chat with Terence Tang

How Terence Tang got his design studio off the ground, and how you can do the same.

There are a lot of creatives in the corporate world who are facing a similar struggle. Can I be doing more? Am I doing my best creative work here?

While a place on a corporate design team can be a perfect landing spot for a lot of people, it’s not for every designer, and if you’re in a role that isn’t pushing you creatively, it’ll have you daydreaming of leaping from your cubicle to your own studio or freelance career.

For a lot of creatives, the dream stops there. The jump is scary and comes with risks, which is why we thought we’d reach out for some encouragement and advice from someone who’s done it.

We caught up with our pal Terence Tang from Tinlun Studio to hear about his design career arc, how he got his creative studio off the ground, and advice he has for fellow creatives looking to make the same leap he did.

How did you get started as a designer?

I guess I got the gears turning when I was in middle school; I had a Nascar game on my computer and I figured out where the art files for all the cars lived. I imported the files into MS Paint (this was a LONG time ago) and designed my own cars.

Fast forward to college — I obtained a pirated copy of Photoshop and just started playing around with it. I was pursuing a degree in film, but I took a few web design classes as electives. When I graduated, I had a better design portfolio than film demo reel, so I went the design route.

Where did you start your career?

I was doing graphic/web design in the medical industry for large healthcare systems. Basically, I was designing banner ads for colorectal screenings and brain tumors and skin conditions. On one hand, I felt like I was doing my part to provide treatment to people with health problems, but on the other hand, I really didn’t feel like I was impacting the world at all.

Why did you start Tinlun Studio?

Tinlun Studio started from a thirst to create stuff for myself while inspiring others. I had been doing corporate graphic design for 13 years and hadn’t really done any passion projects on the side.

I was basically dying inside creatively and just sort of settling into corporate design life, and I got a big jolt after attending my first creative conference and seeing the amazing community of design badassery.

Tinlun is actually my Chinese name, and I originally used it as more of an alias. The harder I tried to come up with a cool/clever name, the more impossible it got. Over time, I realized I liked Tinlun because it allowed people to assign their own meaning to it, but it was still me. So I just ran with it.

On your website, you mention having everything you thought you wanted — design job, big company, decent income — when did you know that wouldn’t be enough to keep you motivated?

I was feeling pretty good about how far I had come. I was a computer-science-dropout-turned-film-major-with-no-demo-reel and had somehow carved out what seemed like a successful career path. I knew it wasn’t enough when I realized that the people I was designing for didn’t actually care about the design; they just needed something that got the job done.

I’m someone who wants to do something right — the best way possible — for people who truly appreciate the difference that attention to detail makes. It didn’t matter that I gave projects 100%; I could’ve delivered at 60% and it would’ve been fine. The extra 40% effort didn’t earn me anything.

Once I figured that out, I actually started giving less than 60%; sometimes as low as 30% — and nobody really noticed — but I wasn’t growing anymore. I was just going through the motions.

What are some of the biggest lessons you learned while making the leap from corporate life to your own design studio?

I’m still trying to figure it out, but the biggest struggle by far has been finding the balance between work, family, and health. It’s kind of like the speed/quality/price conundrum with design; you’re only allowed to pick 2 of the 3. One of them is going to suffer.

I’ve also learned that the amount of hustle needed to run your own business is 10x what I expected. I thought I was hustling, but I’m barely working compared to what I’m seeing from some other entrepreneurs.

What advice do you have for aspiring creatives thinking about branching out and starting their own thing?

I’d say to actually go for it. So many people “think about” starting something but never do. You gotta just go for it.

But, I wouldn’t recommend doing what I did with quitting my job and sinking a ton of savings into something without an actual business plan with concrete numbers and milestones. I basically just tried to wing it and ended up falling on my face. There are so many stories of people accidentally starting huge successful businesses, and it’s easy to think, “they did it by ACCIDENT — I could DEFINITELY do it on PURPOSE.”

Those scenarios are a perfect storm sort of occurrence and are very rare. The reality is that business is SUPER calculated. Start it off as a side hustle, stay patient, and build your brand with good values.

A lot of your work and the items you make go back towards helping others — how did you know you wanted to make that a focus?

I’ve been an altruistic person for as long as I can remember. I have this overwhelming urge to always do the right thing, and do my part to make the world better somehow. I can’t really explain it –– I guess I just feel like it’s my purpose. If I didn’t have to worry about money, I’d probably just do nonprofit work day in and day out.

You just wrapped up your first campaign on Fundit — how did it go? Who did you donate to?

It went super well! I didn’t really know what to expect but the response was amazing and we sold 40 shirts. I chose to donate to the National Compassion Fund which benefits the victims of mass casualty crimes like mass shootings and terrorist attacks.

How much money were you able to raise?

I believe we hit somewhere in the neighborhood of $500ish, which is phenomenal! I’m actually going to continue raising funds via the HumanKIND design; I’ve got enamel pins on the way, and I’m considering doing more Fundit campaigns with different (limited edition) colorways.

How did you primarily get the word out for your campaign?

I promoted solely via Instagram (posts and stories) and Facebook. I posted just about every other day with different imagery and telling a different part of the story. A few people in my audience took the time to share the campaign with their friends as well, so that was really helpful.

Any tips on how to use social effectively for raising awareness?

One thing I realized from promoting my own products on social media is that it’s actually hard to overpromote as long as you don’t sound pushy. There’s a fine line with being pushy when selling your own products, but with raising money for a cause (especially a non-political one), you can overpromote like crazy and still sound passionate.

With this campaign, I basically just sort of went for it and tried to promote as much as possible, because even though you’re posting about it every day, who knows if people are even seeing it that frequently (thanks Instagram algorithm). They might only be seeing it once or twice a week.

Promote often, switch up the language/imagery a bit so that you aren’t a broken record, and emphasize the cause. Don’t make it about you.

What inspired your Summer of Giving t-shirt design?

There are just way too many mass tragedies happening and I felt like all of those events stem from people condemning others for their differences instead of embracing them for their beauty. I was struggling to come up with a design that really said what I wanted to say, and then my wife messaged me one day with HumanKIND. It was one of those HOLY CRAP THAT’S IT moments — it just summed up the sentiment perfectly, and it apparently resonated with a lot of other people as well.

What is your design process from start to finish?

From there I try to come up with phrasing that makes sense; I tried Beauty in Strange, but HumanKIND worked so much better. Then it’s just sketching different compositions, narrowing those down and fine tuning them, then going to vector with it.

Why do you think your campaign was successful?

Aside from the overpromoting and the message, I think I approached my shirt design from a fashion perspective as opposed to just putting a graphic on a tee — and someone told me that. They liked that my shirt was very fashion forward and that it could be worn as something trendy and not just as a typical “I’m bumming it today” t-shirt.

After slapping huge graphics on all of my apparel for the past couple of years and struggling to put together more fashionable outfits together, I noticed a trend toward more subtle imprints with a cleaner look.

Big shout out to Terence for taking the time to chat and share some wisdom with us. Check out more of his work at tinlunstudio.com!

If you’re in a similar spot creatively, or just have dreams you’re looking to make reality, we hope that these words of encouragement and advice help get you there.

For more content and tools around the creative, marketing, and t-shirt spaces, sign up for our newsletter in the footer below and have it delivered to you on the reg. 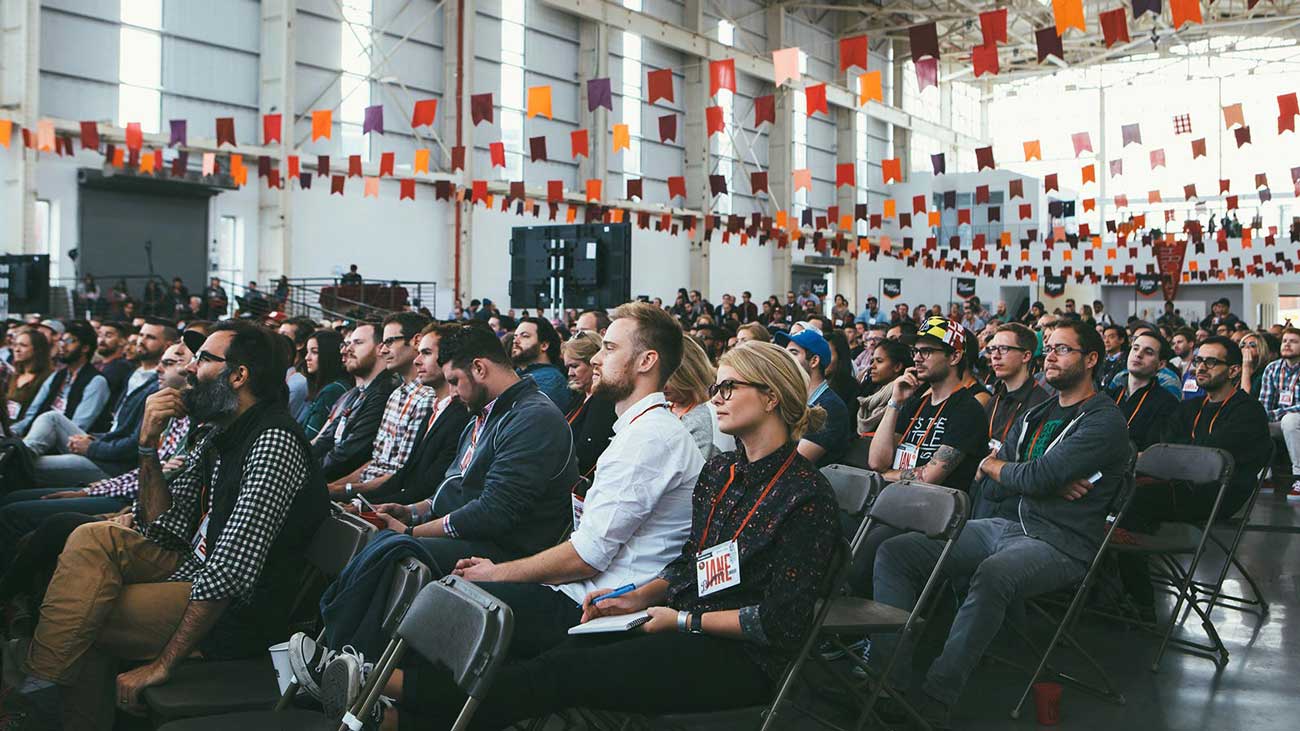 The 17 Best Design Conferences to Attend This Year

Get the rundown on which design conferences you should attend this year.
Design
4
min read 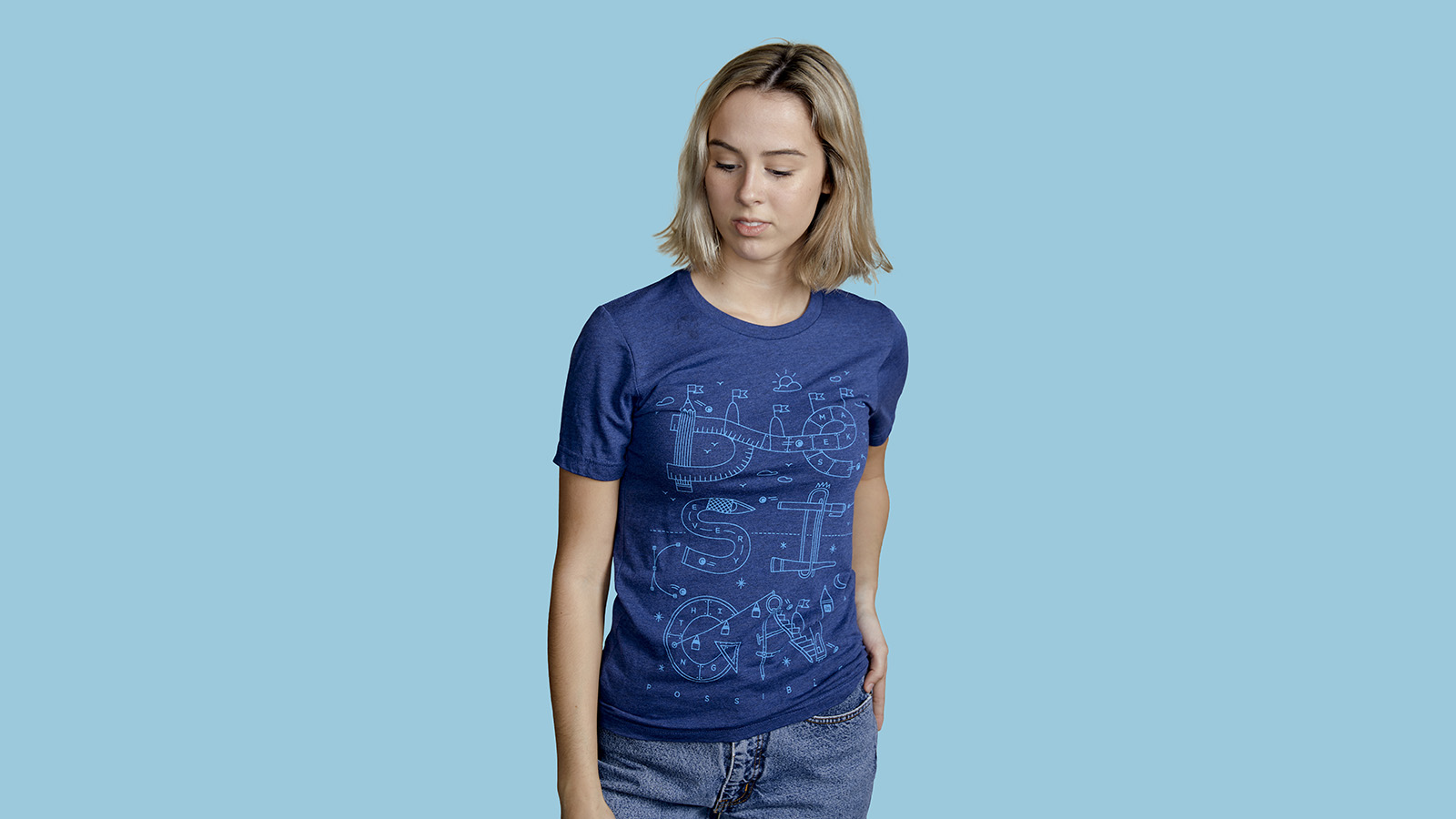 What Exactly is a Tri-Blend?

Get the rundown on this mysterious t-shirt fabric, and recommendations for amazing tri-blend shirts.
T-Shirt Trends
4
min read 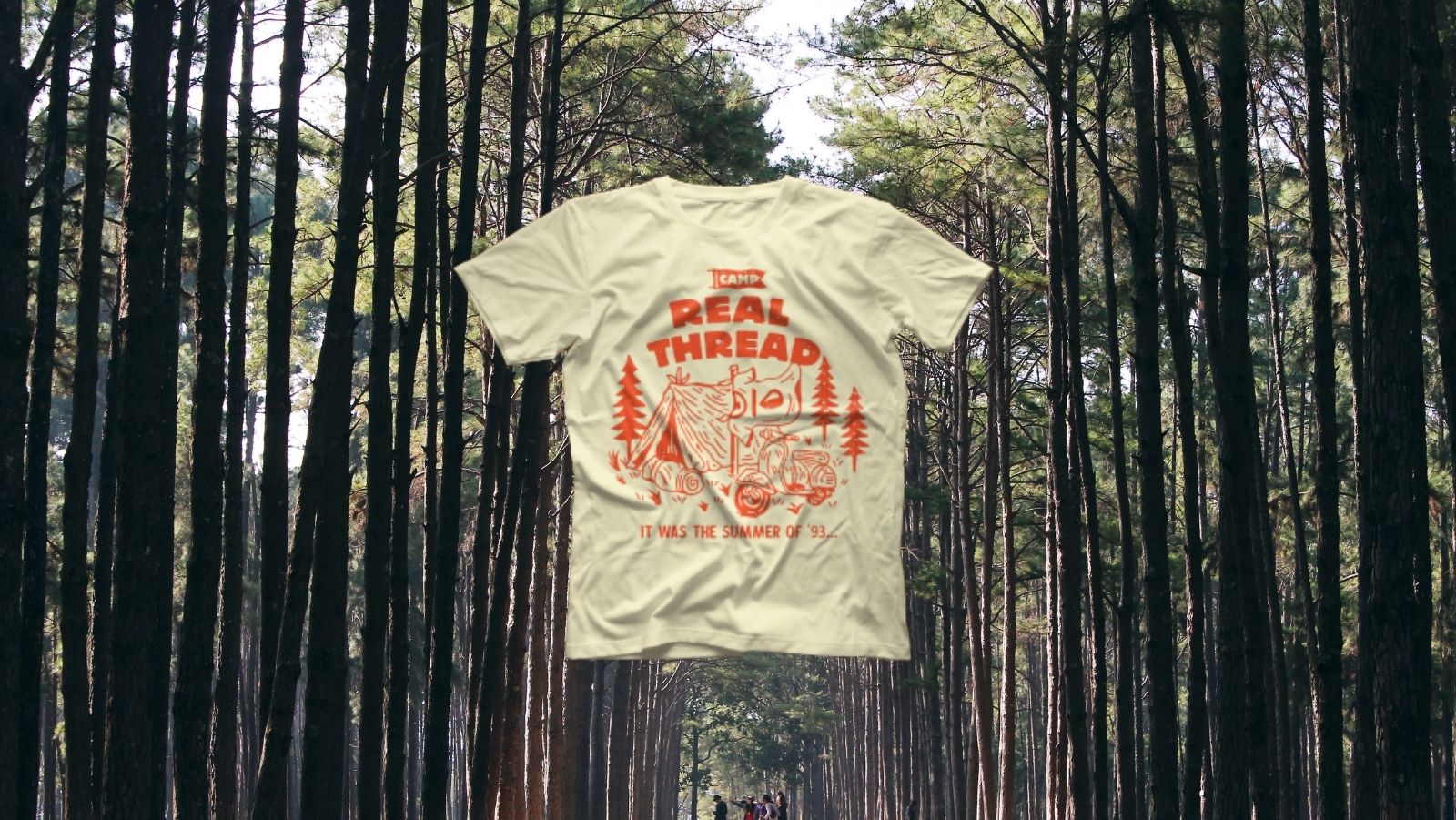 Custom Camp T-Shirts Worth Singing Around the Fire About

Break out the s'mores—here's everything you need to know about designing custom shirts for camps.
T-Shirt Trends
3
min read